This creamy and comforting Banana Cinnamon Smoothie is the perfect winter blend, made with bananas, almond butter, cinnamon, and a dose of veggies from frozen cauliflower.

I don’t know if it’s the colder temperatures this time of year, but I haven’t been in much of a smoothie mood these days. I often enjoy whipping something up with berries, pineapple, or a handful of greens for breakfast, but not lately. Except for this Banana Cinnamon Smoothie.

This smoothie truly hits. the. spot. It’s a really simple recipe and the cinnamon + creamy texture makes it the perfect winter blend.

This smoothie can also be enjoyed as a snack or even as a dessert with a sprinkle of nutmeg on top, kind of like an eggnog! The flavour makes it good for different times of the day. If you do make it for breakfast, you may want to pair it with some eggs, a handful of walnuts, or some yogurt to make it a little extra filling. Or, enjoy it on its own if you’re in the mood for a smaller breakfast. Either way, it’s just delightful!

How to Make a Banana Cinnamon Smoothie

For this smoothie recipe you’ll need:

As you can see, this smoothie calls for some frozen cauliflower. You might be thinking that sounds strange, but trust me when I say it’s a wonderful way to get in a little veggie boost while making this smoothie colder and thicker at the same time. It’s like using ice! It has a very neutral flavour, I promise. I like to keep a bag of frozen cauliflower in my freezer that I get from the grocery store. You could also chop, blanch, and freeze your own.

The almond butter also adds to the creamy texture of this smoothie, plus some added heart-healthy monounsatured fats and a bit of protein. I opt for unsweetened almond butter. If you wanted to, you could use peanut butter or another favourite nut butter instead, although the almond is a really nice choice.

My favourite part of this smoothie is the colour and the little brown speckles from almond butter found throughout. It looks just as deliciously rich as it tastes!

A creamy + comforting smoothie made with banana, cauliflower, nut butter and cinnamon.

If you make this recipe, tag me on Instagram @meghanlivingstone and leave me a comment and review below! I’d love to hear how this smoothie turns out for you 🙂 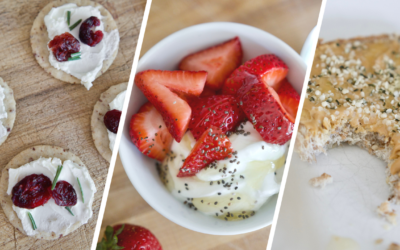 These 5 healthy snack ideas take 2 minutes or less to make and are the perfect way to keep you feeling satisfied between meals. I love snacks. I've been loving them especially so since becoming pregnant because I'm so much hungrier through the day. Having healthy,... 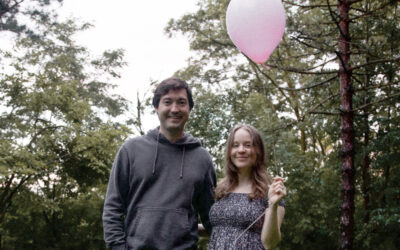 I'm pregnant! In this post I'm sharing our exciting news and an overview of how my first trimester went. As most of you know if you follow me on YouTube or Instagram, I'm pregnant! This blog post is a little overdue, seeing as I'm almost 21 weeks along now, but I...